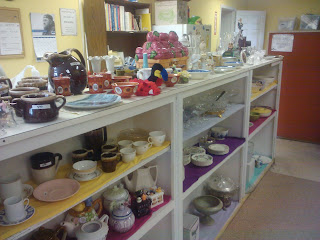 Yesterday I ventured to my local rescue mission.  I love this building.  It's in a old church.  The upstairs is devoted to clothing & soft goods as well as all the crafty supplies; the ground level has furniture, housewares, cleaning supplies & pretty much everything else.

My mission, at the mission, was to get some scrap towels for cleaning walls, baseboards, etc. in preparation for selling my house.  Sadly, the towel selection was lacking.  I did get a few small hand towels/dish towels.  But I scored major when it occurred to me that baby receiving blankets could also be used just as effectively for the job.  I brought them home for the approval of Paige, my housekeeper/moving consultant and she immediately declared them perfect for the purpose.  Yay! 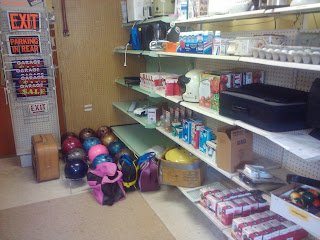 I took a few quick photos as I was waiting at the checkout counter.  The first photo shows the "fine china".  Check out that Pfaltzgraff Brown Drip!  Hard to believe I used to have the better part of an entire set of that stuff.  It is apparently quite collectible.  I think I gave most of mine away because I thought it was ugly.  I'm pretty sure my former mother-in-law still has an entire collection.  In the second photo I just love the dozen bowling balls.  How fun!  Wouldn't they make an awesome display piece in a courtyard or patio.  I have no idea what you could do with a dozen bowling balls, but I would love to incorporate them into my decorating scheme somehow.  Loads of kitschy fifties fun.  Speaking of that, I think my "thing" is going to be flamingos.  My bestie collects ladybugs.  I've always wanted to collect something, but have never found the thing that felt right.  I've flirted with dolphins, elephants, frogs, pigs, and even dragonflies.  None of them has ever felt right.  I've stayed away from flamingos because in general I don't like birds.  But what's not to like?  I will continue to ponder the merits of flamingos as a collectible.  I know for sure it would be a fun bathroom theme. 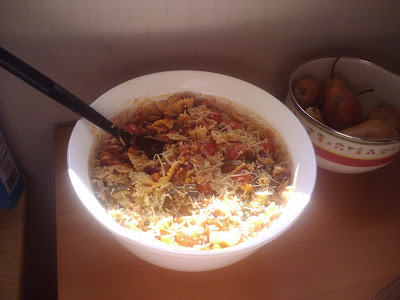 Dinner last night was a smashing success.  My parents were visiting from out of town.  I only see my parents a few times a year, so I wanted to impress them with my cooking while they were here.  Growing up my dad was quite the cook & I've taken after him.  He says that I have even surpassed him -- high praise indeed.  For dinner I took the leftover zucchini stew and added it to a mixture of fresh tomatoes that were sautéed with fresh garlic in olive oil, balsamic vinegar & a touch of white wine.  I mixed the whole thing in with farfalle pasta & shredded fresh parm.  It was amazing! 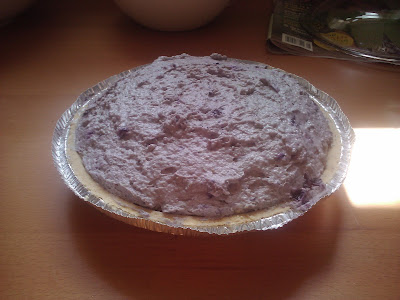 The dessert I made was an homage to my dad.  When I was a kid growing up we went to Maine most summers.  There my mom & I would pick blueberries every morning and then we would feast on Lobster & blueberry everything for two weeks.  It was heaven.  My dad used to make a dessert with blueberries and vanilla pudding.  I stole bits and pieces from his recipe and created this one.  It would be MUCH prettier if I had sprinkled some fresh blueberries on top.  Presentation fail.  But taste -- omg good!


And finally, today's photos of the boo. 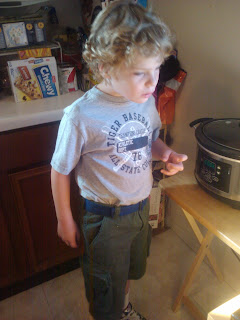 Boo was NOT interested in waking up this morning! 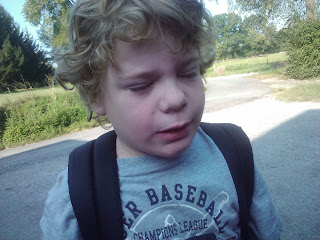 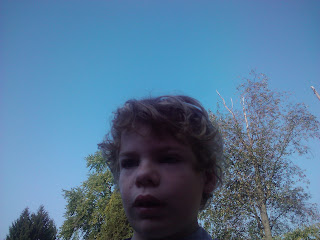 I drug him out of bed about 10 minutes before his van arrived.  Threw him into his clothes.  I even put his shoes on while he was still laying in bed. 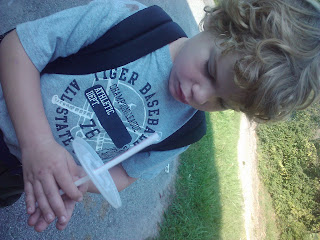 He of course refused to eat breakfast.
Really, I don't blame him. 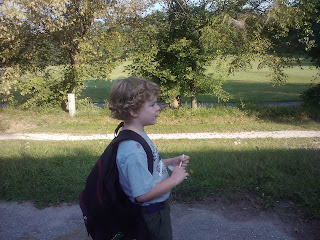 Finally, Mr. Claire arrived and he grumpily climbed into the van for another exciting day of Second Grade.


update:  I got an email from his teacher saying that despite his unhappy start to his day he was doing okay.  Of course, the fire drill 10 minutes after the start of the school day didn't improve his mood, but otherwise he seemed tolerant.  Yay!
posted by angela time 9:59 AM

The pie looks great! I think I'll have to check out the mission... looks like some great finds!
Orin and I love the picture of Jay wit his eyes closed :)