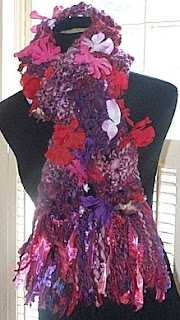 We've got great customers, we will be the first to admit it. Not even admit it, shout it from the rooftops is more like it. One of our favorite customers is Karen. Karen is a crocheter. And man, is she amazing. Amazing and humble. We told her she was an artist, and she shrugged it off the way most of us take off our jacket. Now normally you would have to hop in your car and drive to the Carolinas to see Karen's stuff in a boutique, but she is nice enough to share photos of her creations with us so we can go, "WOW! Our yarn made that!!!" This was made from Beulah. Beulah was a merino blend in the colorway "glam" with silk flowers. Major yum!

Meanwhile, in spinning news, Angela has been working on the ultimate luxury skein. Get this, a blend of cashmere, silk, angora, alpaca & merino plied on a pure handspun silk thread that is been beaded with Swarovski crystals. Oh yeah. It's gonna be so soft and pretty you will want to eat it. No word on yardage yet or pricing. She's still in the spinning the singles. Don't worry, we'll be sure to post pics soon.

Speaking of pics, Michelle from Knit.1 magazine is spending the weekend knitting up her nephew's Minnesota Twins baseball hat made from our Team Spirit Yarn. She promises pictures on Monday. Yay, Michelle! 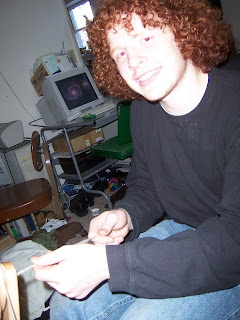 So, things have been exciting, here in the Whirled. For starters, Angela's oldest son is learning to spin as part of his senior focal project for graduation. He's actually learning the entire spinning business, but he's mostly just thrilled because after two weeks of menial labor that included carding, stash sorting, niddy-noddying, setting, ball winding and yes, even drop spindling, yesterday he finally got to touch the wheel. We told him we will get him and his friend Nate (who is learning too) tee-shirts that say, "SPIN STUD" -- can you imagine how much attention two good looking young guys would get at the local fiber festival from the girls? He and Nate are already making plans for Maryland Sheep and Wool in May.

Speaking of fibery events, if you happen to be in the Western PA area, check out the Pittsburgh Knit & Crochet Festival this weekend. We won't be there, but our exciting new scarf kits will be. Imagine pairing the squishy-gooshy decadance of Malabrigo Yarn with our handspun in a scarf that is simple enough for a beginner but will get oooohs and aaaaaahs whenever you wear it - yeah, it's that cute. Be sure to stop by the Uncommon Threads booth (#8 & #9) at the Festival, say "HI" to Beth and check out the kits.

Speaking of oooooohs, we are super duper excited, our friends at Knit.1 magazine have been nice enough to mention us in their blog. Yay Michele, Adina & everyone at Knit.1. We heart you!!!

And we had a big fat update yesterday. Some of the yummies are already gone, but go check out what's new, including this little number:

As you may have noticed, Material Whirled has been growing by leaps and bounds. We've been adding more one-of-a-kind skeins on our site and we've started doing more specialty collections. We have increased our production to online yarn shops and you may have even found us when you walked into your LYS. Two questions people have asked us are, "How are you going to keep up with all of this?" and "How will you be able to continue producing and creating without being burned out?". Well, we are blessed to have found the answer.

As our business has grown and more and more opportunities were being presented to us, we knew we couldn't turn them down. We also knew we needed to occasionally feed our families, do laundry, remember to pay the cable bill, and do all those other non-fiber things. Reenie homeschools her two daughters and created and maintains the website. Paul (Reenie's husband. a.k.a. "Battman") has been dyeing, carding and prepping all of our fiber, in addition to running his business . Angela does the accounting and marketing, runs her local Autism Support group and is the mom to an autistic three-year old in addition to two very active teens. Angela's husband, John, is one of those 80 hour a week computer professionals, but has taken the time to help set up the server, security, and all the deep computer stuff that the normal person cannot comprehend (our own Yoda). So yeah, something had to give...you're right! We can't keep up without burning out! We don't want to lose our passion and creativity by having our production overtake us but we don't want to have our faithful customer friends to have to wait weeks on end to receive orders. As much as we wanted to hire full time houseboys, our husbands wouldn't agree (they said it's not cost effective...whatever), so instead, we did the next best thing.

It started small. We both have sisters-in-law: Erin is Reenie's, Tracy is Angela's. They saw what we did and knew we loved it. They were both stay-at-home moms too and independently they had both mentioned (many times) their interest in learning to spin. They not only wanted to learn to spin but they felt the need, as many of us feel, for a creative outlet. So we taught Erin and Tracy how to spin! Nothing fancy at first, just lots and lots and lots of plain cream roving. They got sick of cream roving. Really sick of it. Then we moved onto dyed rovings and batts with glitz and texture. The amazing thing was the look of satisfaction when after a couple of miles of mess they produced their first usable yarns. There was a different energy about them and they would meet with us and get excited about all of our goals. They have thanked us many times because both were feeling caught up in "life" and said that this is something that has helped more than just financially but emotionally as well. Now, they each have purchased their own wheels, Lendrums, of course, and we have started working together to produce our yarns. We (Reenie and Angela) still do all of the designing and plying in all the "stuff", but we're creating a team of spinners who are thrilled to be a part of this business. In the past few months, we've been teaching a few other SAHMs (Stay At Home Moms) to spin too. Dayna, Kim, Bev, and Debbie who are also working on learning to spin the MW way. There are nine of us now-- WOW! We sure did not see this coming a year ago. Thanks to all of you! We have awakened a passion!!! We have big goals for Material Whirled and have no desire to limit our production and quality or squelch that burning drive to keep this momentum going for what we are envisioning for the future.

Don't worry, MW yarn still comes with the same 100% satisfaction guarantee as always, and honestly, you won't be able to tell the difference. We still spin ourselves into a frenzy and we will never allow a yarn to be sold without our approval and our creative energy. We feel this is a way that you, as the artist using our yarn, will have more skeins to chose from and more possibilites open to you creatively. By having a team of spinners, Reen and Angela can continue to focus on bringing you yarn you won't find anywhere else. We now can devote time to designing and finding cool stuff and inspirations. But the most important aspect of this is knowing that when you purchase our yarn you will not only be getting the quality and creativity of a Material Whirled yarn but will be making a contribution spiritually and financially towards helping stay-at-home moms be at home! See, yarn you can feel good about, yay!

After dibbling and dabbling with this blog thing for, oh, a year or two, we are finally going to settle down and get serious about it. What does this mean for you? No more having to read two blogs to find out what's going on in the Whirled. Reenie will still have her ReenieArt and I will still have my Happy Needle Notebook, but now, finally, Material Whirled will have a blog of its own that actually gets content updates on a regular basis. We'll keep you posted about news, events, new products, MW in print and our favorite, customer shout outs.

So add us to your RSS feed, your bookmarks or maybe jot our new blog url in your magic notebook -- what, you don't have a magic notebook? Gasp! jk ;-)

We promise to post really regularly, maybe even more then once a day if life doesn't get in the way. Till then...

Happy crafting!
~angela (and of course, reenie too)
posted by angela time 9:48 PM No comments: