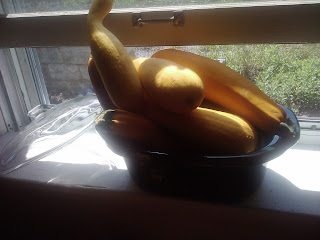 I am so lucky to have so many generous people in my life.  However, did you ever notice the MOST generous ones seem to be the ones who grow zucchini?  What is it about these plants?  Has there ever been a summer where people don't have too much zucchini? 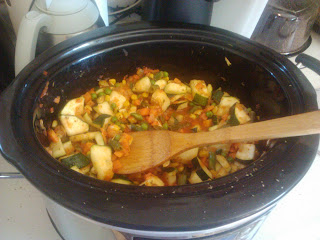 I was gifted with a bounty of green and yellow zucchini this weekend from my dear friend Jural.  Now I don't want to hurt Jural's feelings, but I'm not that big of a zucchini fan.  But she asked if I wanted Cantelopes -- Nope.  Squash -- Nope.  How could I also say no to zucchini?  Of course, the easy thing to do would be to make zucchini bread.  But I don't have an oven.  I know, it's tragic.  Especially for someone who loves to cook as much as I do.  I will be getting a new oven soon, but until then I live with a microwave, slow cooker and stovetop burners.

So I did some research on slow cooker recipes.  And then I did what any self-respecting gourmand does and just said, "I think I'll wing it!"

The crock pot contains one green zucchini (a really big one!), one large bag of frozen veggies, a chopped onion and tomato sauce.  I would have added tomatoes too, but I was out.  I also added a good bit of herbs & some salt.  I think I will make some rice or pasta to go with the veggies.  Not sure yet.  But it smells good so far! 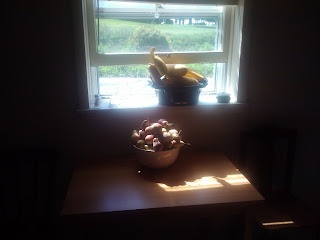 In addition to the zucchini Miss Jural also gifted us with a huge amount of pears.  I think I am going to maybe try to make pear butter tomorrow.  Not sure how it will go, but it can't be much different from apple butter, can it?  I know you can do that in the slow cooker. 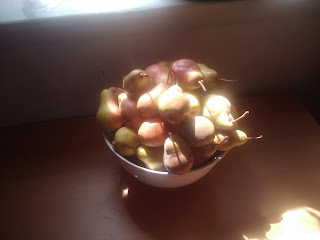 For now I am just enjoying eating the pears right out of the bowl.  And looking at them.  Aren't they gorgeous with the late summer afternoon sun streaming in on them?  It makes me happy! 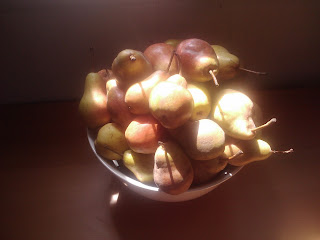 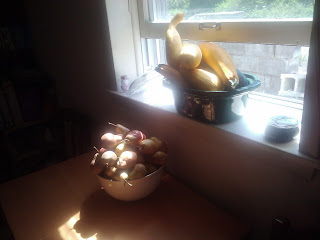 Speaking of things that make me happy, I hit a score at The Christmas Tree Shops last time I stopped in for a quick visit.  The summer (spring?) Waverly dishtowels were on sale $1 for a two pack. So I did some serious stocking up. 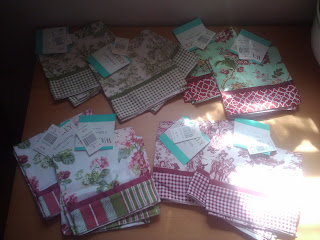 I was thinking of sewing them into some sort of small knitting project bag, but I really, really like them.  I did get four of each, but I might keep them all for my new kitchen at my new house.  I am leaning towards a red toile theme, but I am not sure yet.  Guess I have to wait until I actually find a new house before I plan how I am going to decorate the kitchen!
All I know for certain is that it is NOT going to be apples -- 14 years of that theme is enough! 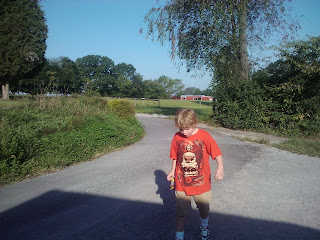 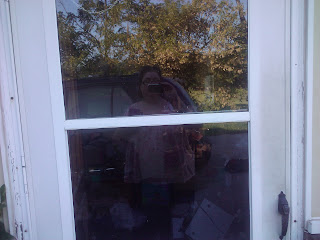 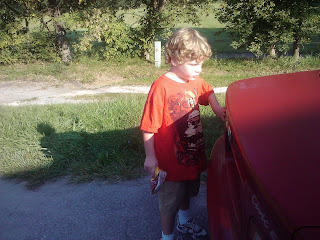 And finally, the boo's picture of the day.  This is NOT the same outfit he wore on the first day of school, although it is similar.  This one has a Buddhist statue sitting on top of a boom box.

Don't ask me -- medium picked it out for him!
Also I've included a bit of a self portrait.  Can you see me in the doorway?  Can you see me clutching my coffee as if my very existence depends on it?  Yes, that is how I look in the morning!
posted by angela time 3:10 PM

I love the towels!

I wish someone would give me some zucchini - my plant got mildew and produced a grand total of two :0(